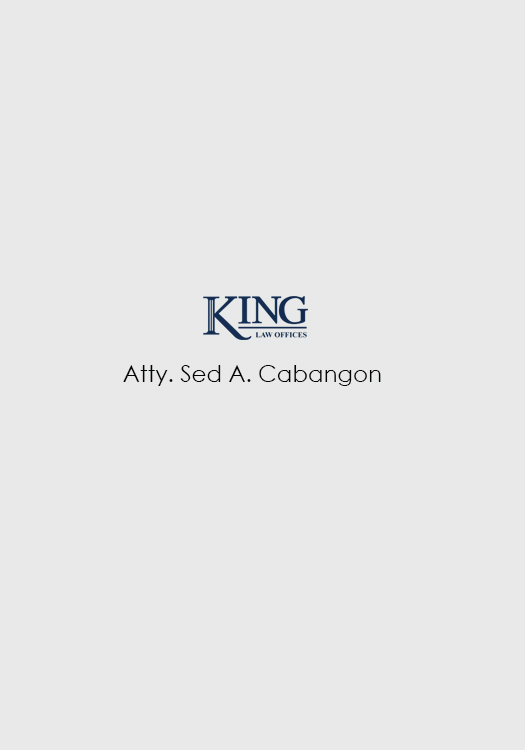 ATTY. SED A. CABANGON
Atty. Sed graduated with his Bachelor of Laws Degree in 1982 from the Manuel L. Quezon College of Law and previously served as an Assistant City Prosecutor of the City of Manila before joining the Law Office. He joined the Law Offices as a name partner in 1998. His areas of practice include civil, criminal, labor and administrative litigation.
Email: sedcabangon@kinglawoffices.ph

Atty. Sed A. Cabangon passed the Civil Service Examination in 1980 and graduated from the Manuel L. Quezon University School of Law in October 1980. He is a member of the Beta Sigma Lambda Fraternity – MLQU.

He took and passed the Philippine Bar Exams in 1981.

He first gained experience as a practicing attorney in 1982 to 1983, when he was the legal counsel for various companies engaged in chemical manufacturing, and handled the various labor, corporate and civil court cases for such companies. From 1983 to 1984, he worked for Del Rosario & Del Rosario Law Offices handling maritime law practice and labor and POEA cases. From 1984 to 1988, he was the corporate and litigation attorney for various corporate clientele, engaged in but not limited to real estate development and food manufacturing. In September 1986, he was appointed as a Labor Arbiter, but did not assume office. From 1989 to 1992, he was a litigation lawyer for Far East Bank and Trust Company.

Atty. Sed joined the Law Office in 1998 and is a named partner in the Law Office. His areas of practice include civil, criminal, labor and administrative litigation.