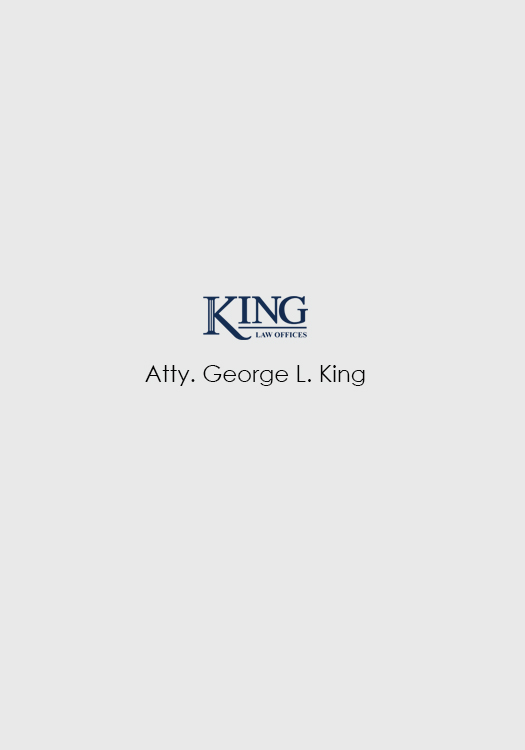 ATTY. GEORGE L. KING
After earning his Bachelor of Laws Degree in 1983 from the University of the East School of Law and passing the Philippine Bar Exams immediately thereafter, Atty. George spent a decade in private law practice with the Ambrosio Padilla Law Offices and Del Rosario & Del Rosario Law Offices and as General Corporate Counsel of the Transnational Diversified Group of Companies. Atty. George's areas of practice include civil, criminal, labor and administrative litigation, corporate legal practice, intellectual property registration, maintenance and dispute resolution, personal and family laws and commercial laws and with highly specialized experience in land titles and deeds and/or onerous or gratuitous transfers of property.
Email: georgeking@kinglawoffices.ph

Atty. George L. King is the founding partner and is the current managing partner of the Law Office. He graduated from the University of the East School of Law belonging to Top 10 of the Class in 1983. He took and passed the Philippine Bar Exams in 1983.

Before establishing the Law Office, he first gained experience as a practicing attorney with Ambrosio Padilla Law Offices from 1984 to 1988, handling various legal assignments ranging from litigation to individual and corporate legal concerns. From 1989 to 1990, he was an associate attorney with the Del Rosario & Del Rosario Law Offices, where he was able to further hone his craft. From 1990 to 1993, he became the Chief Legal Counsel of the Delgado Family’s Transnational Diversified Group of Companies.

In 1993, he graduated from the program Master of Laws at the University of Sto. Tomas.